All players are expected to play within the rules and the spirit of the rules. The rules exist to ensure everyone can be assured of fair play. By taking part in our competitions, players are deemed to have read and accepted the rule and the Code of Conduct.

Teams are made up of four people, with one player as the team’s captain.

You may include up to a further four players in your roster to make up a squad of a maximum of eight. We advise you have at least five people in your squad, so you have someone who can read or score, and so you have additional player(s) should someone not be available one week.

Each team must bring someone to read or score – this can be one of the squad if you have more than four players, or it could be a friend or relative.

Quiz Nations has been designed to test the whole team and individual players in the team too. It has a total of 60 questions in each match. Thirty-two questions are played by individuals and the remaining 28 are played by the teams.

The matches should take roughly 50-60 minutes to play

The questions will be sent to the nominated reader shortly before your allotted playing time. These are password protected.

The Topic Sheets will be sent to all team members 20 minutes before your allotted playing time. Your team should discuss them BEFORE your quiz starts. The purpose of this is for teams to decide the order in which they will play and work out which subjects they hope they can get/hope to steal from their opponents. 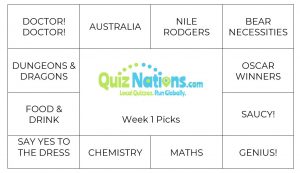 Links to the Quiz Nations scoring system will be provided to the team captains to distribute to whoever is scoring. A .pdf file with a scoring sheet that can be printed out will be sent to captains to pass to any members of the team who want to keep score as they play too.

The team captains will be put in touch with each other to arrange playing times and the venue (live or online).

Ideally, there will be two people proctoring so one can read and the other can score and time. Proctors can either be from the squads playing, teams that have already played, or friends or family members.

The order of play is decided by a coin toss. The winning captain can then choose to play first or second. Whichever team goes first in the first round will go second in the second round.

Although players cannot confer during this part of the competition, they CAN signal to each other if they think they know the answer. Holding up five fingers to the camera, indicates they know they answer. Three fingers will mean they think they know the answer and so on. Teams can decide on their own method of signalling. Players on both teams can do this, including the captains as it will help the captain decide who to pass the question to if the question comes to their team.

Team round – Two points are awarded for every correct answer.

The whole process is repeated, with a new packet of questions and topics, and with the second team going first this time.

Every effort is made to verify questions, but occasionally a player may want to challenge a question. This should be done during the match. The player making the challenge should tell the reader that they are going to challenge the question, but not give any details so BOTH questions in the topic can be played out, thereby giving the reader everyone’s answers. At the end of the pair of questions*, the player should explain the issue and the captains should decide whether or not the matter should be looked into. If the decision is to investigate, the teams can decide whether to stop play to do this, or to look into it after the match, which is probably better.

It is possible to amend the scores at the end of the match, so the initial score can be added at the time and amended later if necessary – with the agreement of both teams.

If the investigation shows that there is an issue with a question, please alert the league organiser so they can correct it asap.

NOTE: If you are in the league organiser’s zoom room, you can call him/her in to adjudicate while you play.

* If the question is in a Mystery Box, it can be discussed straight after the question as there is no danger the the answer to the next questions will accidentally be unearthed.

Questions will all be kept fairly short and will be pasted into the chat window for all players to see (if playing online), especially if players do not have English as their first language or if a player has a hearing impediment.

The scoring software is very straightforward and intuitive. It can even be edited or amended as you go. We very strongly advise that teams use the scoring software as it will help ensure the scores are correct. The system adds scores as you go and so it also makes it nice and easy to announce scores during the match.

We also advise that someone from BOTH teams keeps a note of the scores as you play as a fail safe.

If there is an issue with a score, it MUST be challenged and dealt with while players are still in their Zoom breakout room. After this time, the score will remain come what may unless both teams are in agreement to amend it and/or if the issue arose due to a software failure.

Each Quiz Nation league is run differently, so you should check your league’s page to see how many teams there are, how big the groups are and how many playing weeks there are.

Scoring in the League Tables

There is also 1 point for losing, but being within four marks short of the winner.

Ties will only be split between teams playing knock-out matches or if it affects positions in the next stage.

TB 1. All points during the current stage (or current match in the case of the knockout rounds) except those from offered across individual questions. ie: not counting points that came across from the opposition as this can be skewed by the ability of the opposition.

TB 2. If the teams met each other at any point during the competition, the result of this match will split the tie.

TB 3. One nominated player from each team will be invited to contest a short head-to-head quiz.

At the end of the season, the winners will be declared.

– You should select a seat for the player. When it is their turn, the captain should select a topic. The topic will be read out in the usual way, but will go straight to the team for 1 point. (The team will have 20 seconds to think about it and to signal to the captain if they think they know the answer. There must be NO conferring.)

– We know that life can get in the way of quiz and that a player could get interrupted during a match. If the interruption will take the player away for a minute or two – maybe there’s been a knock at the door, or a child needed some assistance – the player must sit out of any questions in play at the point they are called away. They can only return to play if they are sitting in front of their screen ready when the question begins. If their own individual question comes into play while they are away, the match timer should give them five minutes in which to return. If, after this time, they are not back, the question should be treated as if the player got the answer wrong. ie: it goes to their team for one point, and then over to the other team.

If a player is taken away due to a genuine emergency and it is clear they will not return during the match, a substitute can be made. The event organisers MUST be made aware of this change straight after the match so they have a record of the substitution and can make sure this ruling is not being abused.